Confidence – decision making when dealing with a back-pass

The most common complaint from team coaches seems to be on distribution. Most keepers are good shot stoppers, but their ability to relieve pressure and transition or switch play is often less than perfect. In this short post we describe a small scale drill a coach can utilize to improve the keeper’s ability with their feet, and more importantly, their decision making.

Every coach expects their keeper to perform basic “defensive duties” with their feet. For example, when a ball is played back to the keeper by a defender, relieving pressure and allowing a safe option to switch play from one side of the field to the other, the keeper is performing a valuable duty.

In this drill, the keeper stands on the edge of the penalty area (the “D”) facing away from goal.

The coach, standing next to one of the posts, starts the drill with a “go”.

The keepers turns 180 degrees to face the goal as the coach feeds them a ball on the ground, simulating a back-pass. 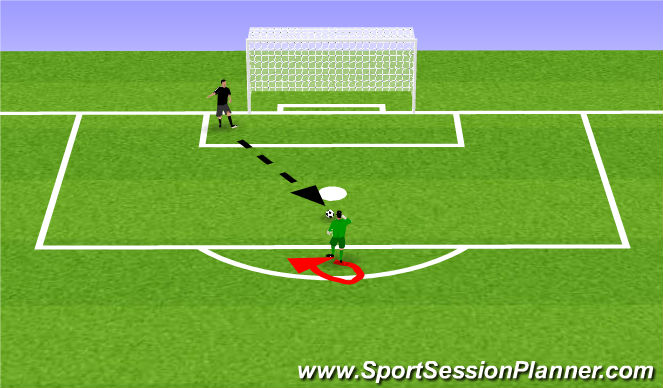 The coach has already described the target zones to the keeper – top and bottom, right and left, corners of the goal. Use the goal to prevent chasing a ball all night, but it’s only necessary for the target positions. A couple of flags are just a useful.

The twisting around 180 degrees helps induce a slight panic and disorientation, which is often the case in a real back-pass in a game.

Once the ball has arrived at the feet of the keeper, they either take a touch, or if the coach prefers, makes the one-touch pass/shot directed at the target zone, eg TR or top-right. 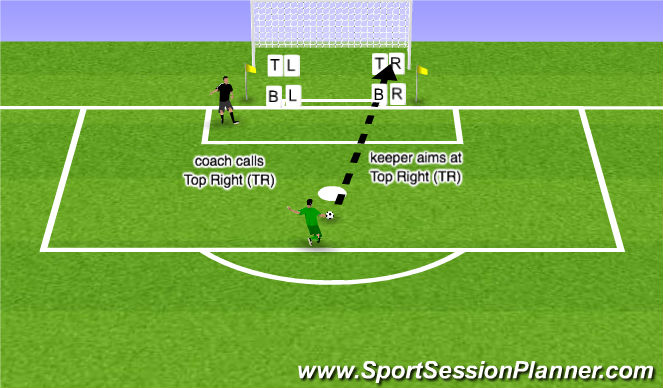 You can induce even more disorientation and “decision making” by making the regions reference the opposing sides – eg  right becomes the right-hand side as the keeper is facing away, NOT as they are facing. In essence, right becomes left and vice versa.

Bottom means on the ground, while top just means “lofted”, not exactly in the top corner.

While the accuracy is important, the crucial aspect of the drill is the decision making. Facing away, listening for the coach to shout the target, then registering the passed ball and deciding where on the target area the target zone actually is (eg TR) is quite a lot of “thinking”.

This drill, done 8-10 times, will certainly test a keeper and enhance their thinking speed and decision making.

Tricks of the trade

How should a keeper be best prepared for a backpass? Well they should already have a good idea where everyone is and where players are motioning towards, before the pass. Is this unreasonable to expect?

If you’ve played chess, then you know the answer is no. When you make a move in chess, you already have a good idea where pieces are already, and the latest new information is the last move by the opponent. A good keeper views their “defensive arena” as a chess board, with each piece already noted. They should already have a good idea of the best move – who to pass to and how – before the ball is passed to them.

In this drill, they should already be confident they know where right and left are on the goal. However, the 180 degree twirl can put that “belief” to the test, just as in a normal game situation.

Any coach can utilize these drills with their keeper. The objectives are the same – enhance footwork, follow the ball better with the eyes, and judge the flight of the ball.

A coach can use any one of the drills independently, and involve multiple players, especially attackers, to sharpen their skills too.

Try to encourage the keeper to use these skills – their footwork, their eyes and reflexes, and be brave to make the judgement calls and decisions that will come up regularly in games.