Most outfield players and coaches would argue a goalkeeper “should never be beaten at their near post”.

Goals scored in this manner, slipping between the goalkeeper and their nearest goalpost, are considered a “special sin”.

In this post, we want to deal with this “urban myth”, and help young keepers to minimize the risk of conceding “at their near post”.

In a word – no. A goal is a goal and it matters little if you’re “beaten at your near post”. Beaten is beaten.

So why do coaches consider this such a sin? Well it’s probably because, if you’ve covered the goal well and leave only a small area vulnerable between you and the goalpost, you shouldn’t concede.

In reality, it’s never as simple as that.

Let’s look at a few examples. Two lessons on how to cope with danger at your near post, and one example of failure.

In this example, Buffon, a 41 year old veteran takes no chance with the shooting skills of Man Utd’s Rashford. The striker makes space from nothing, and whips in a shot from a wide angle, which Buffon has to parry for a corner.

Look at the way Buffon is positioned for a cross to the centre where two strikers  are lurking. He’s expecting a shot from around the penalty spot, and ready to charge out and collect if the cross is weak.

Instead Rashford charges towards the goal-line, but is well covered by the defender. He has options – a back heel to the fullback behind him, who can cross, or a cross himself (see red lines below).

As Rashford moves tighter to the line, Buffon takes no chance and covered his post. Just as well as the shot is hard and high and might have sneaked in or hit the post and rebounded to the strikers.

This is pure experience at work – an old head, that knows the risk is there, despite the aggressive attention of his defender and the wide angle.

In the same game, Pogba works his way along the line and tries to cross the ball into danger, but Buffon again snuffs out the danger, diving low and to his right.

But seeing the danger develop, he quickly moves towards the near post.

How not to position for danger out wide.

In the third example, again Man Utd’s Pogba, we see how the Fulham keeper mistakenly assumes Pogba is going to cross into danger, but instead takes a shot and scores.

As the danger develops, the keeper is immediately in the wrong position. His chance of covering a cross is good but not certain, while he leaves a huge gap between himself and the post. Pogba takes advantage.

As the ball is played through, the keeper is very central, but ready to come out and gather.

The defender tracks Pogba and drags him wide. But the Keeper remains off his line, as if ready for a cross. 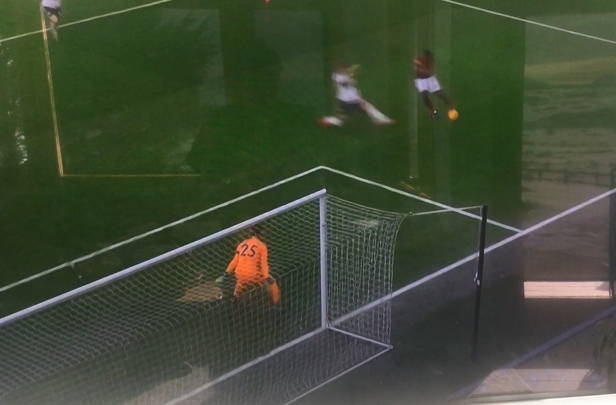 He’s far too far away from the post leaving a wide target for Pogba.

This looks to us to be a keeper error, despite the skill of the striker.

So we’ve seen how an experienced keeper can prevent conceding, simply by good positioning, protecting that near post.

We also saw how, by leaving too big a gap, the keeper can increase the risk of a goal.

We’d suggest that a mistake at the near post is no different from any other positioning mistake. If you’re in the wrong position, you’re increasing the risk of conceding a goal.

That said, all positioning is a compromise between different risks.

When the keeper is on the near post as Buffon was, they still have to stop the ball from passing into the danger area, which would leave the goal undefended.

If a goal is conceded, it doesn’t matter that it wasn’t “at the near post”.

As we described above, there is no such thing as “being beaten on the near post”. Conceding a goal is all that matters. The way to reduce the risk, as with all goalkeeping issues, is a combination of confidence-cohesion-technique.

Make sure you maintain the keeper’s confidence. Letting them think there is something especially sinful about “the near post error” is counter productive.

Instead help them see they need to work on their technique, especially regarding their positioning relative to the goal. The near-post is just a “gps point” to help that referencing, The key is that they only have to worry about one side of the post. The rest (outside the post ) is safe.

They also need to work on cohesion with their defenders. They can’t cover the whole penalty area, and need defenders to track back and cover strikers that are poaching. As the opponent approaches with the ball, the keeper needs to narrow the angle and make themselves big, but remain close to the goal-line and/or post.

Devise rondos and scenarios that allow several strikers to attack the goal, with a couple of defenders and a goalkeeper.

Take the examples in the videos and play out the scenarios, starting with stationary players. For example the layoff in the last video example is easy to manufacture, and will help the keeper learn to positioning accurately while relying on their defenders to cut of the cross or rebound.

Alternatively, use one striker to shoot from a tight angle, and have the keeper jog from post to post before setting ready for the shot.

2 thoughts on “Never be beaten at your near post ”